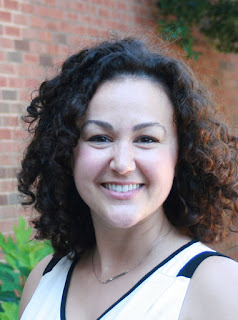 There is so much to be said about bringing diverse abilities and talents into the profession of optometry.  It is typically a win-win proposition for both the student and the profession.  Certainly, it is an area that the Admissions Committee looks at carefully as they always like to envision – not only how a student will succeed academically and be an effective member and leader within both their “family” (i.e., class) and within the College of Optometry – but also how they positively impact others after graduation.  An outstanding representative of this type of individual is a talented student leader in the Class of 2019.  Meet Rachel Simpson.

Rachel’s past life was that of an actress.  Not just your normal actress . . .  but a New York actress!  She describes how it all started: “I've always loved plays and musicals. I started doing theater when I was little and I never stopped. I studied theater in undergrad at Indiana University. During college I did summer stock at The Barn Theatre in Michigan and even worked one summer as a puppeteer at Bob Kramer's Marionnettes here in St. Louis. After college, I wanted to keep doing plays, so I moved to New York City and went out on auditions. That was a great adventure and I was lucky to make a lot of wonderful relationships with other performers, playwrights, and directors. Some of my favorite gigs in New York were singing with the New York Grand Opera, dancing on the stage at Radio City Music Hall, and originating roles in the Fringe Festival. I also really loved acting jobs that would take me on the road. I did two national tours and I was in the company of the Seven Devils Playwrights Conference.”

So after many years of acting what led her to pursue the optometric journey: “I'm a low hyperope, so I didn't have much experience with optometry until I had my eyes checked in 2012. At that appointment, I was impressed with how graceful the doctor was and I found the examination very pleasant. I left thinking, ‘I bet I could do that.’ It felt like the right next move for me. I went back to school for biochemistry with the goal of becoming an optometrist. I'm originally from the Metro East, so UMSL College of Optometry was on my radar. Visiting the campus and meeting Dr. Bennett, Linda, Nick, Dr. Simmons, and Dr. Landgraf convinced me that this was the school I had to attend.”

One quality we have noticed at the College of Optometry over the years are the individuals who have had a past career and diverse experiences often become very effective and positive leaders who make a difference in the lives of those they associate with, and ultimately in the profession.  That quality totally defines Rachel Simpson.  Of course she has been an outstanding student ambassador for the program but she observed an important area of inequality in optometry and initiated a student organization to help address this problem as she relates:  “Last year, I read an article in Review of Optometry about the wage gap in our profession and it made me want to do something about it. My classmates Heather Jackson, Kate Hamm, Valerie Wisco, Lulette Fermil, Amy Brooke, Sara Taylor, Sydney Kapp, and I worked together to start a campus organization, United Optometrists Association, with the goal of ensuring that optometry remains an excellent profession for optometrists of every race, color, religion, national origin, sex, sexual orientation, gender identity, gender expression, age, disability, and status as a protected veteran. The UOA’s first goal is to research and solve the wage gap in optometry. We feel that if optometry can solve this, our profession will lead the way for others. This year we held a contract negotiation seminar to prepare us to advocate for ourselves upon graduation. Next fall we're planning an "Ethical Employer Speaker Series" where we, as future employers, learn to confront our biases to foster safe, equal workplaces for those we employ. We’re trying to come at this wage gap from the side of the employee and the employer. I've been so thrilled with how warmly the UOA has been received by my classmates who have been amazing, the College of Optometry, and UMSL as a whole.”  You can check it out at www.unitedopt.org.

During her tenure in optometry school, she has found several ways to combine her obvious talent in acting to her future profession.  This has included being the voice of the new American Optometry Association (AOA) promotional video entitled: “United in Possibilities” You can google “AOA United in Possibilities” or click the following link to see the video: https://www.aoa.org/optometrists/membership/united-in-possibilities-join-online-here?sso=y and being featured in the College of Optometry’s new promotional video to be available online later this month.

Rachel definitely feels that she can combine her acting talents with optometry as she relates: “Actually, optometry school is quite similar to acting. When we learn a new procedure, my classmates and I rehearse it over and over. Then the proficiency is like opening night; you have to be off-book and hit your marks. I've had a few chances to act in optometry school. Last summer the AOA asked me to do the voiceover for their United in Possibilities commercial. That experience was terrific and got me interested in doing more voice acting. Since then I've narrated two audiobooks and am planning to do another this summer. Voice acting is the perfect after school job for me. It gives me a creative outlet. I also had a lot of fun working on the UMSL promotional video. The crew and director knew what they were looking for, so that made it very fast and easy.”

As a student-leader with acting experience, she is gradually defining her future role in the profession: “I definitely see myself still doing audiobooks as a hobby after graduation. It's too much fun to quit. Right now, I'm inspired by campus speakers who have started as optometrists in large corporations and have convinced the corporation they work for to make a change for the better. Changing the company from within. That's where I think I could make the biggest difference in the profession. If I could get one of the big corporations to commit to doing hiring and salary audits, or to establishing a network of substitutes so that ODs could utilize their paid time off to care for family members without repercussions, which would do a lot toward pay equity. I like to take things that are already pretty good and work to make them great. That's what I want to do when I graduate. I want to maximize corporate optometry.”

Popular posts from this blog

April 19, 2017
The 56th Annual Contact Lens & Primary Care Congress presented by the Heart of America Contact Lens Society was, once again, a great success and represented a great opportunity for College of Optometry students and residents to network, present posters, receive high quality continuing education, and help as monitors and graduates to have the opportunity to see their classmates and enjoy, not only the expansive exhibit hall but also customize their education based upon the five tracks of courses given simultaneously.  The faculty included two UMSL graduates, Drs. Rebecca Wartman(‘87) and Shane Kannarr(‘00) and Assistant Dean, Dr. Ed Bennett.  Likewise, the Heart of America Board of Directors had a significant UMSL presence with Drs. Sean Mulqueeny(‘91), Wes DeRosier(‘96) and President Craig Brawley(‘01).  Dr. Delaram “Deli” Shirazian(’16), currently completing the Kansas City Veteran’s Administration Medical Center residency program, was a recipient of a $2,000 grant from
4 comments
Read more

April 20, 2017
One of the most beloved faculty members in the history of the College of Optometry recently received very positive and deserved news: he was promoted from Associate to Full Professor.  For Director of Research, Dr. Carl Bassi, this promotion came rather late in his tenure but represents a very significant accomplishment.  The number of Full Professors at UMSL is not large and his promotion doubles the number of Full Professors in the College of Optometry. In fact, the College of Optometry has only had five Full Professors in their 37-year history. He came to UMSL nearly 30 years ago after receiving degrees from several prestigious institutions, a PhD in Psychology from Vanderbilt University and a Post doctorate Fellow in Ophthalmology from the University Of Southern California Doheny Eye Institute.  Based upon his background he was most qualified to teach Monocular Sensory Processes but as that course was always the priority for another vision scientist he has literally
5 comments
Read more

White Coat Ceremony: A Wonderful Tribute to the Class of Harmony

June 28, 2017
On May 19th, a beautiful Friday afternoon, 41 future optometrists formally received their white coat, significant by virtue of the fact that they now have clinical privileges allowing them the ability to provide direct patient care.  They worked very diligently during their second year of optometry school to receive the recognition bestowed upon them on this day. Master of Ceremonies, Assistant Dean Dr. Ed Bennett welcomed the students who, based upon a very common personality trait, have been termed the “Class of Harmony”; “Harmony is defined as unity, agreement, friendship, and fellowship and this certainly defines the Class of 2019.  This is a class of exceptional leadership and maturity, and that has been very important this past year.  Some of you came to UMSL making a career change . . . thank you . . . we greatly benefitted from the talents you brought to our College as well as your engagement and leadership, and you will bring these qualities to o
5 comments
Read more